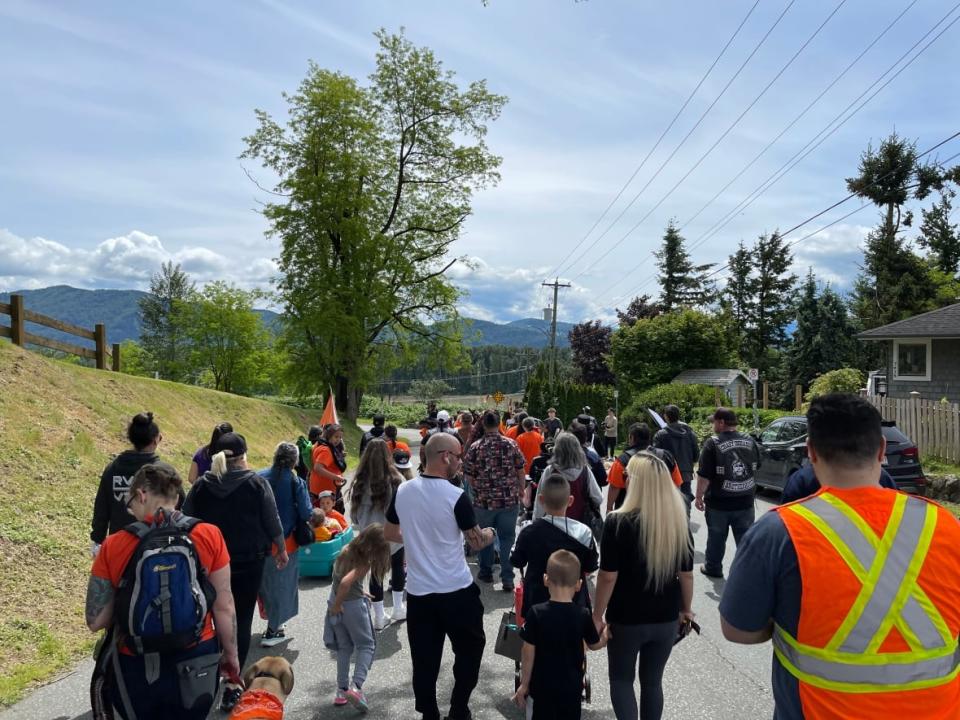 Dozens of marchers, including children and elders, were walking along the eastbound lane of the highway on June 4 when a driver allegedly plowed into the crowd at around 12:30 p.m. PT. (Robert Jago - image credit)

A man has been criminally charged after the vehicle he was driving plowed into several people during a memorial march for residential school survivors in Mission, B.C., earlier this year. Richard Albert Manuel, 77, was charged with dangerous operation of a motor vehicle on Tuesday. Dozens of people were marching down Lougheed Highway near the site of the former St.

Mary's Indian Residential School on June 4 when the incident occurred. Witnesses said the driver of a blue Chevrolet Silverado made racist comments and blatant threats before plowing into at least four people. They said he then left the scene.

One victim suffered a concussion and soft-tissue damage to his hip. Another was taken to hospital. In a statement days after the incident, RCMP initially said the driver was "impatient" and had been trying to get around the group "despite the safety risk." The statement also said police didn't believe the driver targeted marchers or their cause, despite not having spoken to him.

WATCH | Witnesses recount what happened during an alleged hit-and-run in Mission, B.C.: The characterization was widely condemned by those who were at the march, as well as community leaders. It was later deleted from the RCMP's website.

In a statement on Wednesday, RCMP thanked "the victims and witnesses who came forward and helped to get the investigation to this stage." St. Mary's operated at two different sites in Mission for more than a century before it was shut down in 1984.

The march was organized by the Crazy Indians Brotherhood after the discovery of potential burial sites at the Kamloops Indian Residential School in May 2021 sparked a national moment of reckoning. Participants near St. Mary's were calling for ground-penetrating radar to search the St.

Mary's site for the possible burial sites of children who did not survive after being forced into the institution. Story continues Manuel is set to appear in court on Jan.

9. WATCH | March organizers claimed RCMP left them vulnerable: Support is available for anyone affected by their experience at residential schools.

A National Indian Residential School Crisis Line has been set up to provide support for former students and those affected. Emotional and crisis referral services can be accessed by calling the 24-hour national crisis line: 1-866-925-4419. KUU-US Crisis Line Society (B.C.): A First Nations- and Indigenous-specific crisis line available 24 hours a day, 7 days a week, toll-free from anywhere in British Columbia.

KUU-US Crisis Line can be reached toll-free at 1-800-588-8717.  Alternatively, individuals can directly call the Youth Line at 250-723-2040 or the Adult Line at 250-723-4050. First Nations and Inuit Hope for Wellness Help Line (National): The Hope for Wellness Help Line offers immediate help to all Indigenous peoples across Canada and is available 24 hours a day, seven days a week and offers both counselling and crisis intervention. Call 1-855-242-3310.