Hurricane Ian's most damaging winds have begun hitting Florida's south-west coast, lashing the US state with heavy rain and pushing a devastating storm surge after strengthening to the threshold of the most dangerous Category 5 status. Fuelled by warm waters in the Gulf of Mexico, Ian grew to a catastrophic Category 4 hurricane overnight with top winds of 155mph, according to the National Hurricane Centre. The storm trudged on a track that would have it making landfall north of the heavily populated Fort Myers area, which forecasters said could be inundated by a storm surge of up to 18ft (5.5 metres).

"This is going to be a nasty, nasty day, two days," Florida governor Ron DeSantis said, stressing that people in Ian's path along the coast should rush to the safest possible shelter and stay there.

Ian menaced Florida after bringing destruction on Tuesday to western Cuba, where two people were reported dead and the entire island was blacked out as the storm brought down the country's electrical grid. Hurricane Ian's centre was about 50 miles west of Naples at noon on Wednesday, as it churned towards the coast at 9mph. Ian's plodding pace meant the storm was expected to spend a day or more crawling across the Florida peninsula, dumping flooding rains of 12 to 18in (30 to 45 centimetres) across a broad area including Tampa, Orlando and Jacksonville in the state's north-east corner.

Catastrophic storm surges could push 12ft (3.6 metres) of water or more across more than 250 miles of coastline, from Bonita Beach to Englewood, the hurricane centre warned. "It's going to get a lot worse very quickly. So please hunker down," Mr DeSantis said.

Off the coast on Sanibel Island near Fort Myers, swirling water covered residential streets and was halfway up postbox posts by mid-morning. 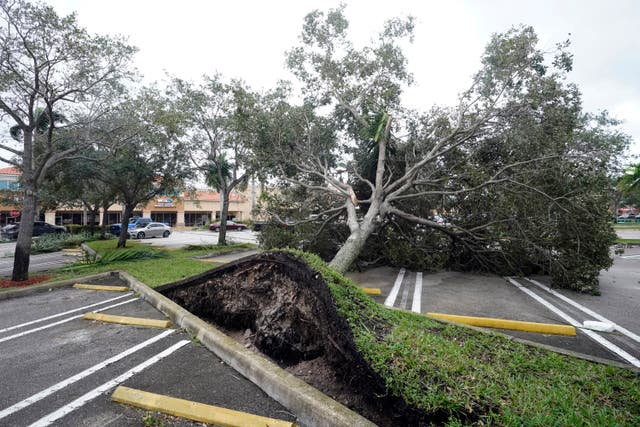 An uprooted tree, toppled by strong winds from the outer bands of Hurricane Ian, in a car park of a shopping centre in Cooper City, Florida (Wilfredo Lee/AP)

Sea water rushed out of Tampa Bay, leaving parts of the muddy bottom exposed, and waves crashed over the end of a wooden pier at Naples. More than 2.5 million people were under mandatory evacuation orders, but by law no-one could be forced to flee. The governor said the state has 30,000 linemen, urban search and rescue teams, and 7,000 National Guard troops from Florida and elsewhere ready to help once the weather clears.

Florida residents rushed ahead of the impact to board up their homes, stash precious belongings on upper floors and join long lines of cars leaving the shore. Some chose to stay and ride out the storm. Jared Lewis, a Tampa delivery driver, said his home has withstood hurricanes in the past, though not as powerful as Ian. 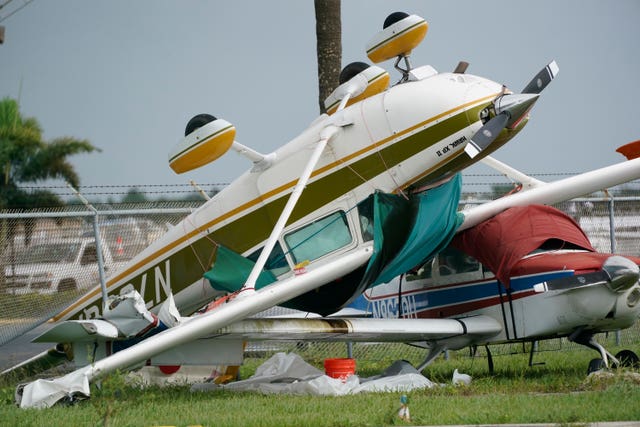 A plane overturned by a likely tornado produced by the outer bands of Hurricane Ian at North Perry Airport in Pembroke Pines, Florida (Wilfredo Lee/AP)

"It is kind of scary, makes you a bit anxious," Mr Lewis said.

"After the last year of not having any, now you go to a Category 4 or 5. We are more used to the 2s and 3s." Forecasters predicted Ian would make landfall more than 100 miles south of Tampa and St Petersburg, probably sparing the densely populated Tampa Bay area from its first direct hit by a major hurricane since 1921.

Officials warned residents that Tampa could still experience powerful winds and up to 20in (50cm) of rain. "Please, please, please be aware that we are not out of danger yet," Tampa mayor Jane Castor said in a video on Twitter. "Flooding is still going to occur." 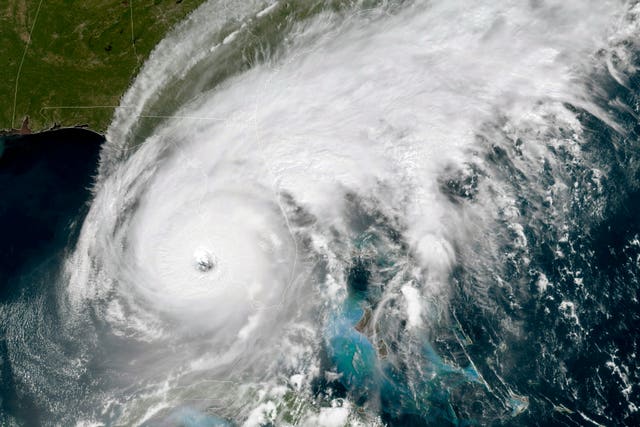 This GOES-East GeoColor satellite image taken at 12.01am EDT on Wednesday and provided by the National Oceanic and Atmospheric Administration, shows the eye of Hurricane Ian approaching the south-west coast of Florida (NOAA via AP)

During the night, Ian went through a natural cycle when it lost its old eye and formed a new one.

The timing was bad for the Florida coast, because the storm got stronger and larger - 120mph to 155mph - with landfall just a few hours away. The size of the storm also grew, with tropical storm force winds extending 175 miles from the hurricane's centre. "With the higher intensity you're going to see more extensive wind damage," University of Miami hurricane researcher Brian McNoldy said.

"The larger wind field means that more people will experience those storm-force winds." The most damaging winds could hit a coastline where the population has jumped sevenfold since 1970, according to the US Census. A couple walk along the waterfront amid the effects of Hurricane Ian in Saint Petersburg, Florida (Steve Helber/AP)

Flash floods were possible across all of Florida. Hazards include the polluted leftovers of Florida's phosphate fertiliser mining industry, more than one billion tons of slightly radioactive waste contained in enormous ponds that could overflow in heavy rains.

Forecasters placed roughly 120 miles of central Florida's east coast under a hurricane warning on Wednesday, signalling that Ian may remain a hurricane longer than previously expected as it moves inland. Isolated tornadoes were spinning off the storm well ahead of landfall. One tornado damaged small planes and a hangar at the North Perry Airport, west of Hollywood along the Atlantic coast.

More than 200,000 homes and businesses were without electricity, and Florida Power and Light warned those in Ian's path to brace for days without power. 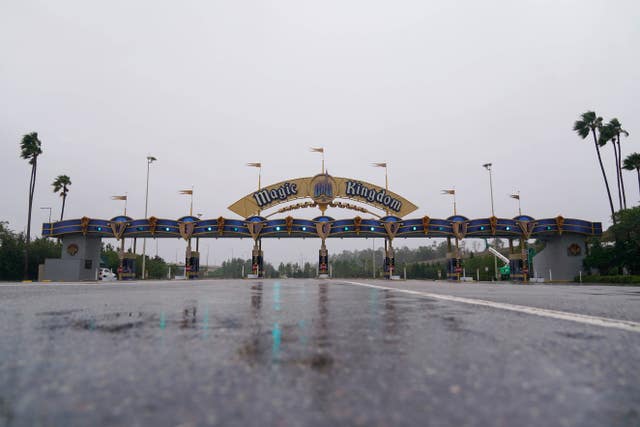 The federal government sent 300 ambulances with medical teams and was ready to truck in 3.7 million meals and 3.5 million litres of water once the storm passes. "We'll be there to help you clean up and rebuild, to help Florida get moving again," US President Joe Biden said. "And we'll be there every step of the way.

That's my absolute commitment to the people of the state of Florida."

Parts of Georgia and South Carolina could also see flooding rains and some coastal surge into Saturday.