Tracks and signalling around Ely will be among the long list of renewals and improvements scheduled from the end of this week in the Great Britain. The traditional late August Bank Holiday (public holiday) weekend is also one of the busiest times for engineering works on the network. This year is no different, with the infrastructure management agency Network Rail scheduling a huge programme for this last weekend in the month.

The widespread August renewals programme will mean an equally widespread programme of diversions and rescheduling. Most eye-catching of all are the planned works from Ipswich to both Ely and Cambridge - the principal routes out of Britain's busiest intermodal port at Felixstowe. Doubtless the preceding strike throughout this week at the port will be an additional headache for rail freight operations.

While passengers will have the opportunity to find out what a modern road coach feels like, freight operators will be faced with a series of lengthy diversions.

Ely is a critical hub for rail freight movements, notably from the port of Felixstowe (Network Rail Aerial Services)

Network Rail does however stress that ninety-five per cent of the network will remain open over the public holiday. "I'm pleased to say the vast majority of the railway will be open for business as usual this bank holiday", said Andrew Haines, Network Rail chief executive. "Upgrading the railway to improve future journeys remains crucial, and bank holidays are often the most productive time to carry out such works."

Changed pattern of works in future?

Traffic patterns have changed significantly in the past two years. Leisure passenger travel has become more important, with a reversal of the decline of the past thirty years. That's seeing more people using the railways outside the working week.

Network Rail has already said they may revisit their own pattern of works, but for now it is business as usual. Among the 90 million pound (107 million euro) programme of works this weekend will be piling works at London Euston to enable the delivery of the new HS2 high-speed railway. To help facilitate those works, Network Rail say an amended, reduced timetable will run between Northampton, Milton Keynes and London Euston.

The HS2 project has relied heavily on rail freight for support, which has been particularly in evidence at the vast Euston station site, helping to keep construction traffic off the congested roads of the busy inner-London borough of Camden.

Also around London, there will be plenty of work for maintenance and permanent way operations this weekend. Junctions are being rebuilt at Charing Cross terminus in central London, and also at New Cross, in the south eastern suburbs of the city. Resignalling work is also being undertaken in south west London and on the East Coast Main Line just north of King's Cross. 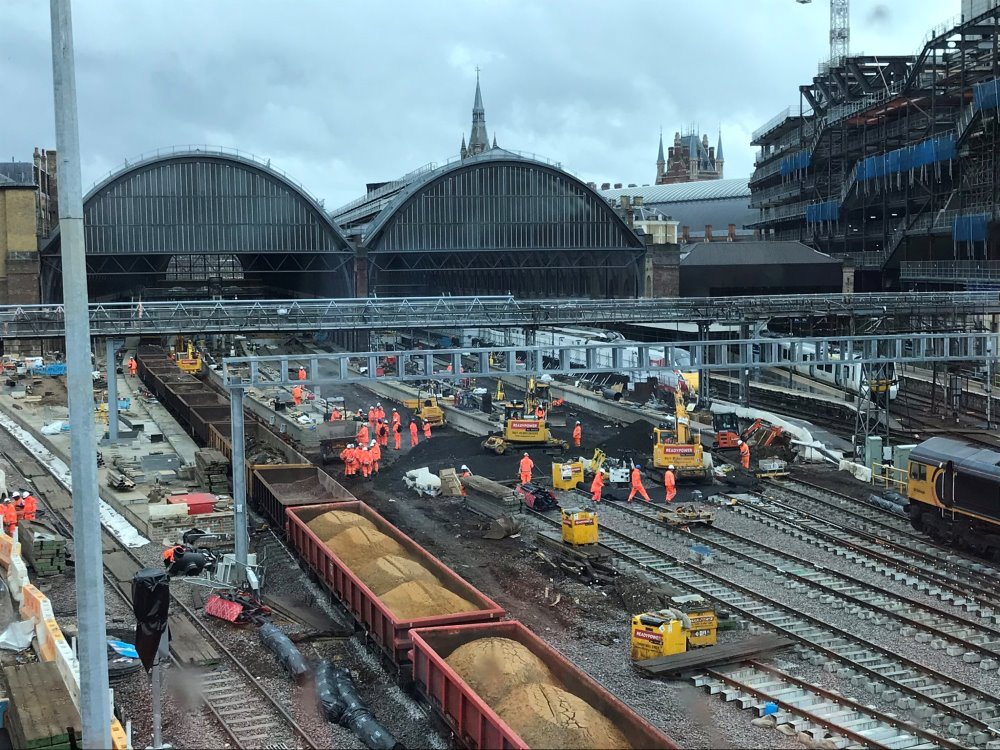 The work on the lines out of King's Cross is taking place as part of the UK government funded East Coast Digital Programme, which will see traditional signals removed from the tracks and replaced with state-of-the-art digital signalling technology.

The August Bank Holiday work will see the installation of 67 equipment cabinets which will prepare the route for the transition to digital operation. It is expected that the first trains to operate using the technology will run in 2025.

Perhaps the new technology will help settle the two-centuries old debate over whether or not to apostrophise "King's Cross".

We're sticking with the format as applied to the signage around the station.